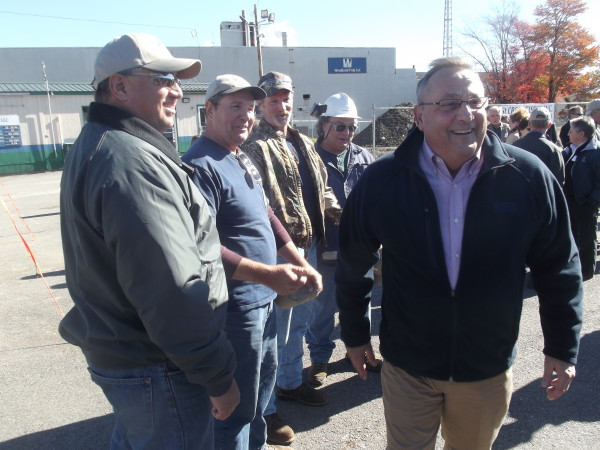 BAILEYVILLE, Maine — While the start-up of two new tissue paper machines has been put off by three months due to construction delays, the St. Croix Tissue Mill already has hired more than 70 new employees to run them, according to the company.

Woodland Pulp, an affiliate of St. Croix Tissue, had announced in March 2014 that it was adding two tissue machines and 80 jobs in a $120 million expansion at its pulp mill in Baileyville, located along the border of New Brunswick, Canada.

“We originally stated our plan was to start Tissue Machine No. 1 in [the fourth quarter of] 2015. As the construction phase has matured, our revised schedule now has No. 1 commencing operations in early 2016,” Woodland Pulp LLC Communications Manager Scott Beal said this week. He added that the company has experienced no unusual issues with construction.

The startup of the second tissue machine, originally set to be running in the first quarter of 2016, has been pushed back to the second quarter, Beal said.

Despite the delay, the spokesperson said, Woodland Pulp had hired a total of 71 new employees as of Aug. 24 to run the tissue mills.

The Baileyville facility appears to be bucking the trend experienced in other areas of the state, where paper and pulp mills are closing or in trouble. Lincoln Paper and Tissue LLC filed for Chapter 11 bankruptcy protection on Sept. 28.

The Verso Paper Mill in Bucksport and the Great Northern Paper Co. facility in East Millinocket were both shut down last year.

Beal said Woodland Pulp supplied some pulp to the mill in Lincoln, but said Lincoln’s difficulties “really haven’t had a material impact on our business.”

Beal declined to say whether Woodland Pulp was interested in acquiring either of the troubled mills.

“We are focused on our operations in Baileyville, the established pulp mill and the new tissue project under construction,” he said. “As future business opportunities arise, they are evaluated for their strategic fit. … We don’t make it a practice to publicly discuss our future business plans.”

BACK TO ALL NEWS + EVENTS

“In an industry where most grades of paper are facing slack demand, tissues are one of the few specialties where sales are actually climbing,” says John Williams, president of the Maine Pulp and Paper Association (as quoted in the Portland Press Herald, 3/12/14)

With today’s digital age, demand for most grades of paper products continues to drop, however, there is a steadily rising demand for toilet and tissue paper that goes with population growth.

Not only can St. Croix Tissue capitalize on the growing demand for tissue, its East Coast location gives it a
competitive advantage to more cost-effectively transport the product.